The Crime Prevention Department of The National Police (ORFK) organized a professional training for local expert refrees of child and victim protection country-wide from 3-5 December. The program was called „Child and Victim Protection at the Police”.

The role of the civil organization on preventing victimology had a specialy emphasysed part of the three-day training.

The civil sphere was represented by the Hungarian Baptist Aid on 5 December. The activities on assisting and preventing of the Organization was introduced by Agnes De Coll to the experts of the Police.

Title of the project:

Together with its Austrian partner organization LEFÖ-IBF, the Hungarian Baptist Aid started a project against human trafficking called Lucia on 1 Spetember,2013.

Within five thematic networks Project RECOM worked together with other projects, organizations on strategies and project-initiations. Projects could be nominated based on the joint proposals of RECOM’s project partners and the program’s regional counselors. For each thematic network, three has been chosen by consensus decision. 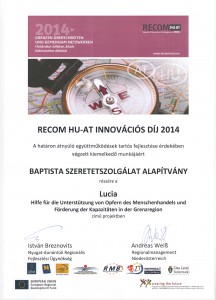 RECOM is the joint project of regional development organizations, which have years of experience in cross-border cooperations.
The main purpose is to help the acceptance of cross-border activities and the awareness of the co-operation and to deepen the cooperation between the regions on both sides of the border.

RECOM would like to support the successful realization of the ideas and initiations and the projects planned with and between the regions.
RECOM is also considered as the platform of cross-border exchange of experience and regional co-operation management. 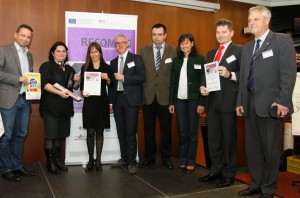